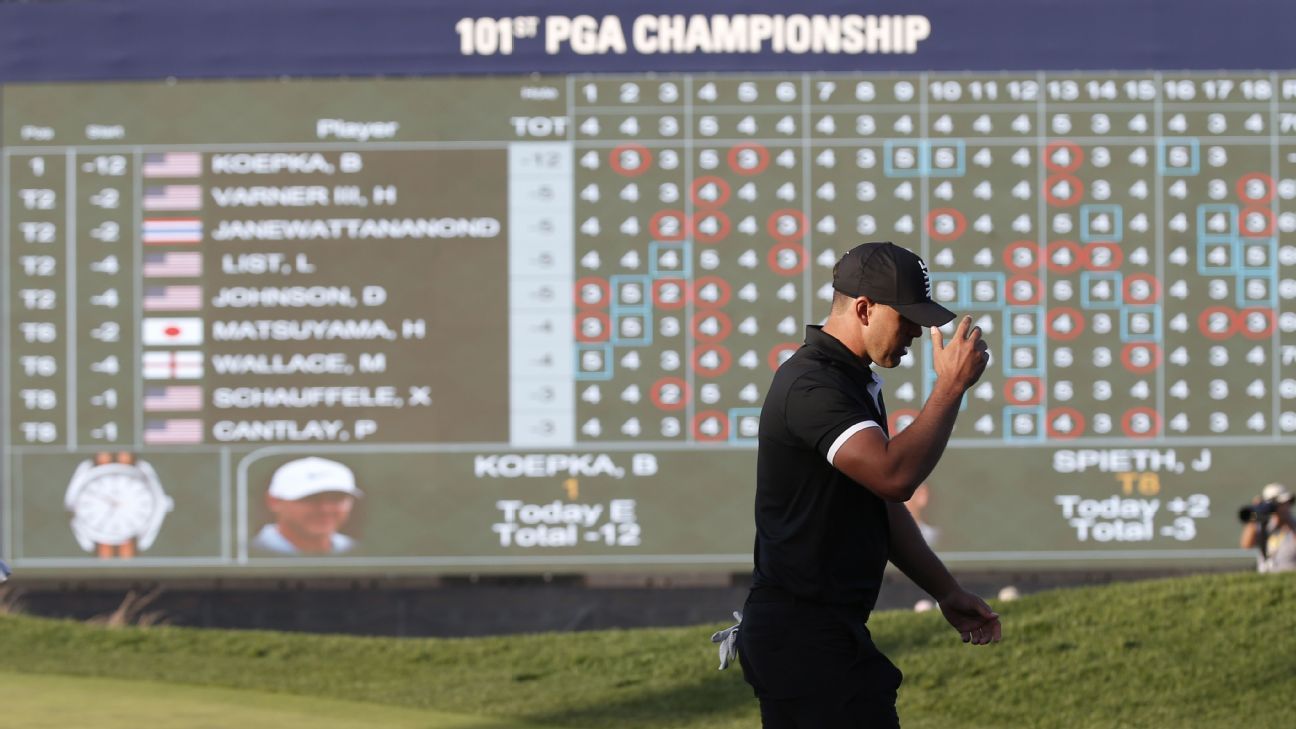 FARMINGDALE, N.Y. — Brooks Koepka didn’t widen his lead in the third round of the 101st PGA Championship at Bethpage Black on Saturday.

But the defending PGA Championship winner didn’t give anything back to the rest of the field, either.

Koepka shot even-par 70, for a 54-hole total of 12 under, to maintain his seven-shot advantage heading into Sunday’s final round, with his buddy Dustin Johnson, Harold Varner III, Luke List and Thailand’s Jazz Janewattaanond chasing him as the closest competitors.

In the Masters era since 1934, there have been 24 instances of a golfer having a lead of five or more strokes through 54 holes at a major championship.

“Well, I’m definitely not going to let up; I promise you that. … I’d love to force it on the field and I can make it where it’s as big as a lead as I possibly can get,” Koepka said. “I mean, it would be nice to be able to make a 10 on the last hole and be okay. But I’m just playing to play good golf, and wherever that puts me, I’ll be satisfied if I just go play one more good round.”

While it might be too early to etch Koepka’s name onto the Wanamaker Trophy for the second straight year, it seems inevitable through 54 holes.

“It is a weird thing,” said Xander Schauffele, who is tied for eighth at 3 under. “This is a major championship, and everyone is here to win, but there’s only one guy who’s absolutely just destroying this place. So I’m sure he’s having a blast. But for the rest of us, he’s making it awfully boring.”

With that being said, here are four reasons you should watch the final round of the PGA Championship on Sunday:

Because we have to see what else Koepka does

Koepka has torched the field. He’s set some milestones and has some others in sight.

He could join some big names who have won more than one PGA Championship and U.S. Open:

New York is a big stage. Few have owned the marquee more than once in a major:

It’s been a long, long time since anyone has gone wire-to-wire, which Koepka is set to do:

There are only 15 players with 54-totals under par, and one of them is more than likely going to finish second to Koepka.

DJ thinks he has a chance, but he’s likely playing for second like everyone else.

“I’m going to need some help from him [on Sunday], and then I’m going to have to play very, very well,” Johnson said.

Koepka leaked oil at times on Saturday — he had consecutive bogeys, on Nos. 9 and 10, for the first time since The Players in March and also posted a bogey on No. 16 — but no one else took advantage of his mistakes.

Along with the four players in second place at 5 under, Matt Wallace (4 under), Schauffele (3 under), Patrick Cantlay (3 under), Adam Scott (3 under), Jordan Spieth (3 under) and Rickie Fower (1 under) are in the mix.

Will anyone apply some pressure to Koepka on Sunday? DJ might have done it in a final pairing, but he posted a bogey on No. 18, which gave the spot to Varner III. Seems unlikely.

“No one likes to play for second, but that’s sort of what he’s doing to us,” Schauffele said.

The top four finishers in the PGA Championship, including ties, receive invitations to the 2020 Masters.

A handful of players currently ranked outside the top 50 of the Official World Golf Rankings are in contention to earn their first trip to Augusta National, including Varner III, Janewattananond and South Africa’s Erik Van Rooyen (tied for 12th at 2 under).

“It’s awesome. It’s a great opportunity,” Varner III said. “It’s going to be a great day no matter what happens. This is what you practice for, and obviously I’m super excited.”

Two other players — List and Lucas Glover (tied for 16th, even) — are in contention to return to Augusta for the first time in a while. List last played the Masters in 2005, Glover in 2014.

Here’s what they did Saturday. You never know what they’ll do Sunday,

Shattered the record. Not the round I wanted. Game is closer than my score. I’m putting all I have into tomorrow’s round. Thank you NY for all your support. ❤️👍 pic.twitter.com/A0w9O6YXCs

Tony Finau‘s dance is way better than his hole-in-one celebration.

My New York fans ask for an 🦅 dance. I do an eagle dance 🤣 https://t.co/CGPXpgwBZ6

You never know who gets the Bronx cheers at Bethpage.

So who knows what comes next.